Check out this story by Monte Jones who gives leadership to DOVE Community Church in Red Lion, PA. 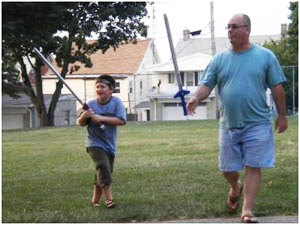 The park in our community of Red Lion has always been a trouble spot. The borough has tried to curtail the problems ensuing as teens regularly take over the park and run out the families who want to use the playground. The borough increased the police presence and installed surveillance cameras, yet nothing worked. It was a frequent topic of discussion at the monthly borough meetings. At one meeting, I was asked to open in prayer. As they proceeded to share the police report, once more the issue of the problems at the park came up. The borough president asked me if there was anything we could do to help. Since I am the acting director of the 18 South Youth Center in town, he knew that I was familiar with the situation and knew many of the youth involved. I assured him that both the youth center and our church would respond to the borough’s request.

So this summer our cell groups ventured out of the living room and into the park!  For three months each cell served in a different area. One cell met at the basketball court and often had a dozen youth hanging out and playing ball. Another cell group met at the playground, setting up ladder ball, bocce ball, frisbees and handing out water and snacks. We received lots of comments from parents who said they only brought their children to the park on the day “those people” were there because they felt safe.

One of our board members for 18 South, who is a police officer, remarked that he could tell we had been praying in the park because when we were there they did not have to assign a police officer to the area. He also observed that this summer recorded the fewest number of incidents in recent history and more families were returning to the park.

As a result I have been asked to be part of the COP (Citizens On Patrol) program in Red Lion. I see this as an excellent opportunity to get other churches involved by providing prayer walking teams as a part of the COP program. Also, I noticed that even though we were only in the park one night a week, the anointing carried throughout the week. Next year I hope to convince other churches to take responsibility to be present other nights in the park.  Together we can bring the Kingdom of God to this park and our community of Red Lion!