The Purpose of Fivefold Ministers

Fivefold ministers have a burning desire to lead people into the fullness of their inheritance in Christ and the ministry to which He has called them.

“Go for the gold!” One of our church’s fivefold ministers uses this expression when encouraging people to reach out for their potential in God. It is his way of letting them know that the things of God are attainable if they give themselves wholeheartedly to the King and His kingdom. Jesus has already paid the price and forged the pathway for them to fulfill their destiny. As a fivefold minister, he knows his job is to train and encourage people to aim high.

Fivefold ministers have a burning desire to lead people into the fullness of their inheritance in Christ and the ministry to which He has called them. They are called by the Lord and commissioned to work within and alongside the local church to help identify, acknowledge and stir up spiritual gifts within the body of Christ.

While the fivefold gifts do not automatically carry a governmental authority, which is the authority to rule or make decisions for a church, they do carry a spiritual authority that cannot be denied. Their words and thoughts carry weight because of the gift and anointing in their lives. Those on a church leadership team, who have governmental authority, respect and honor what the fivefold ministers are sensing. But it is the church leadership who make final decisions for the church they are leading. We will address additional dynamics between church governing leadership and the fivefold ministers in the next chapter.

The fivefold gifts were given to the church to enable God’s people to do the work of ministry. According to Ephesians 4:11-12, effective fivefold ministers not only equip the saints for the work of ministry but also help bring the body of Christ to maturity. Their goal as fivefold ministers is to train, equip and prepare believers to be functional in everyday life as ministers of the gospel of Jesus Christ so they can become spiritually mature. In other words, the fivefold minister’s job description is to enable believers to “walk the walk,” not just “talk the talk.” Their passion is to see the church grow into maturity.

The power of the five working together

I have found that an easy and effective way to remember each of the fivefold gifts is by symbolically using our five fingers. We could say the index finger is the prophet, pointing in the direction the Lord is directing. The middle finger is the evangelist, out front bringing others to Christ. The ring finger is the pastor, the one who is married to the church. The little finger represents the teacher, able to probe into the truths of the Word of God. The thumb represents the apostle, the one who can touch all of the other four gifts. In Chapter 6, we will discover how the apostle brings unity to all the fivefold ministers and causes them to work together so that the church can move forward in oneness.

All five of these working together really make a powerful impact. For example, if someone hit you with one or two fingers, it may hurt a little bit. If that person slapped you with all four fingers, it would hurt quite a bit. But if four fingers are placed together and the thumb is used to anchor them into a fist, that punch has the possibility of doing serious damage.

The same is true in the spirit. When each of the fivefold gifts functions and flows together in unity with the apostolic touching each one, a force is released that breaks through the spiritual powers of darkness!

There is positive, divine tension among the gifts when the five gifts are working together harmoniously. Each individual with fivefold gifts will see things from a different perspective. To illustrate, here are two very different perspectives a prophet and teacher could have of the same Sunday service. The prophet says, “We should have spent more time in the presence of the Lord this morning. I felt the Lord was just about ready to speak and say something powerful to us. We should have worshiped a little bit longer. People were just beginning to respond.”
The teacher says, “Why did we spend so much time in worship today? We are cheating the people out of the Word. They need more of God’s Word in their lives.”
The divine tension between an evangelist and a pastor may sound like this: The evangelist says, “Let’s just get more people saved.” The pastor counters, “We need to get those who are saved grounded in the Word of God. We can’t handle more new babies.”

The evangelist replies, “But they’re already saved; we need to be concerned about those who aren’t saved.”
This divine tension between the gifts is a healthy one, but it takes someone with an apostolic gift to be able to draw from each of these perspectives and bring unity.
The timeframe of the fivefold ministry

It is not unusual for confusion to arise when the subject of fivefold gifts is discussed. People ask, “How important is the fivefold? Are these gifts really for today?” Some say the fivefold ministry, especially the apostolic and prophetic ministry, passed away at the end of the first century. They believe that the fivefold ministry gifts are obsolete and are now lost to the church.
Some groups, believing that there are no apostles after the original twelve, call them the “fourfold” ministry gifts and acknowledge only the pastor, teacher, prophet and evangelist. Others think that the pastor-teacher is one combined gift. Still others feel the apostle is all the other four gifts rolled up as one, and that is what makes him an apostle.

How did the church become so confused over the fivefold ministers? Certainly, the New Testament church had a clear understanding of the fivefold ministry. However, with the passing of time, these ministries in the everyday life of the church became less clear, according to Vinson Synan, Dean and Professor of Divinity at Regent University:
Thus, for centuries, the offices of pastor and teacher have been familiar ministries in all churches. However, only since the middle of the nineteenth century, with the success of Charles Finney and other “professional” evangelists of that day, has the office of evangelist gained a popular understanding and acceptance.
The offices of apostle and prophet have been more elusive for modern Christians. Many have accepted a belief developed throughout the centuries that the age of the apostles and prophets ended around 96 A.D., about the time John, the last apostle, died…. Over time, as the bishops consolidated their power in the church, the office of apostle was almost forgotten.1

In spite of the fact that the church ignored many aspects of the fivefold ministry down through the ages, I believe the operational timeframe for all the fivefold ministry gifts remains the same as the timeframe we see in Ephesians 4:13, “until we all reach unity in the faith and in the knowledge of the Son of God and become mature, attaining to the whole measure of the fullness of Christ.”
Has the church reached “true unity in the faith”? Has it become fully spiritually mature “to the whole measure of the fullness of Christ”? With the many things that so often divide us, the church obviously has not completed its mission yet. The church still has much to accomplish, and all of the fivefold ministers should be in place to help us do it.

The fivefold gifts have been given to the church until the purpose laid out in Ephesians 4 is fully accomplished. Christ gave the gifts, so they will function until His return. From the time we are born until we go to be with Jesus, we need impartation from the fivefold ministers. Their gifts are needed today more than ever. They were not meant to pass away with the death of the early apostles and prophets but to continue into the present age to help the body of Christ mature in unity.

Many leaders and believers alike are under a misconception that all teaching, training and spiritual feeding for the congregation must come from the senior leader of the church. This way of thinking cuts off most of the help God has given the local church.

The senior leader of a church is responsible to see that the fivefold ministers are released in the church so that all believers can come to maturity and the unity of the faith. The fivefold ministers help to ground believers in the Word of God and become more like Christ. Christ has provided teachers to help with the line upon line teaching, prophets to declare a word prophetically to help the congregation hear what the Lord is saying and evangelists to stir up the people and give them a heart for the lost.

With the fivefold ministry working together, God’s divine intent is that no one person has to feel the weight of doing all the work on his own. Instead, a fivefold team of individuals can walk and labor alongside local church leadership.

Perhaps the church has had difficulty in releasing the fivefold ministers partly because Satan uses every means possible to prevent the fivefold from operating in the church. He knows the power that will be unleashed when these individuals are fully released.

I heard one teacher say that if Satan can hijack these gifts, it will be as effective as the Philistines removing the blacksmiths from Israel—which resulted in warriors without weapons. The enemy can restrain full operation of the fivefold by duping people into thinking they can manage without the gifts or otherwise confuse their understanding of the fivefold ministry.

In our family of churches, DOVE International, we have seen the fivefold released to a certain degree, but not without challenges. Yet, every time I read Ephesians 4, I am convinced that this is the way the Lord designed His church to function, and I am willing to do what is necessary to bring it about.

When we see the fivefold integrated and walking alongside the local church, I believe we will see a mature and powerful church released that will pull people out of the darkness of hell and turn them into future residents of heaven.

Taken from the book Fivefold Ministry Made Practical by Ron Myer 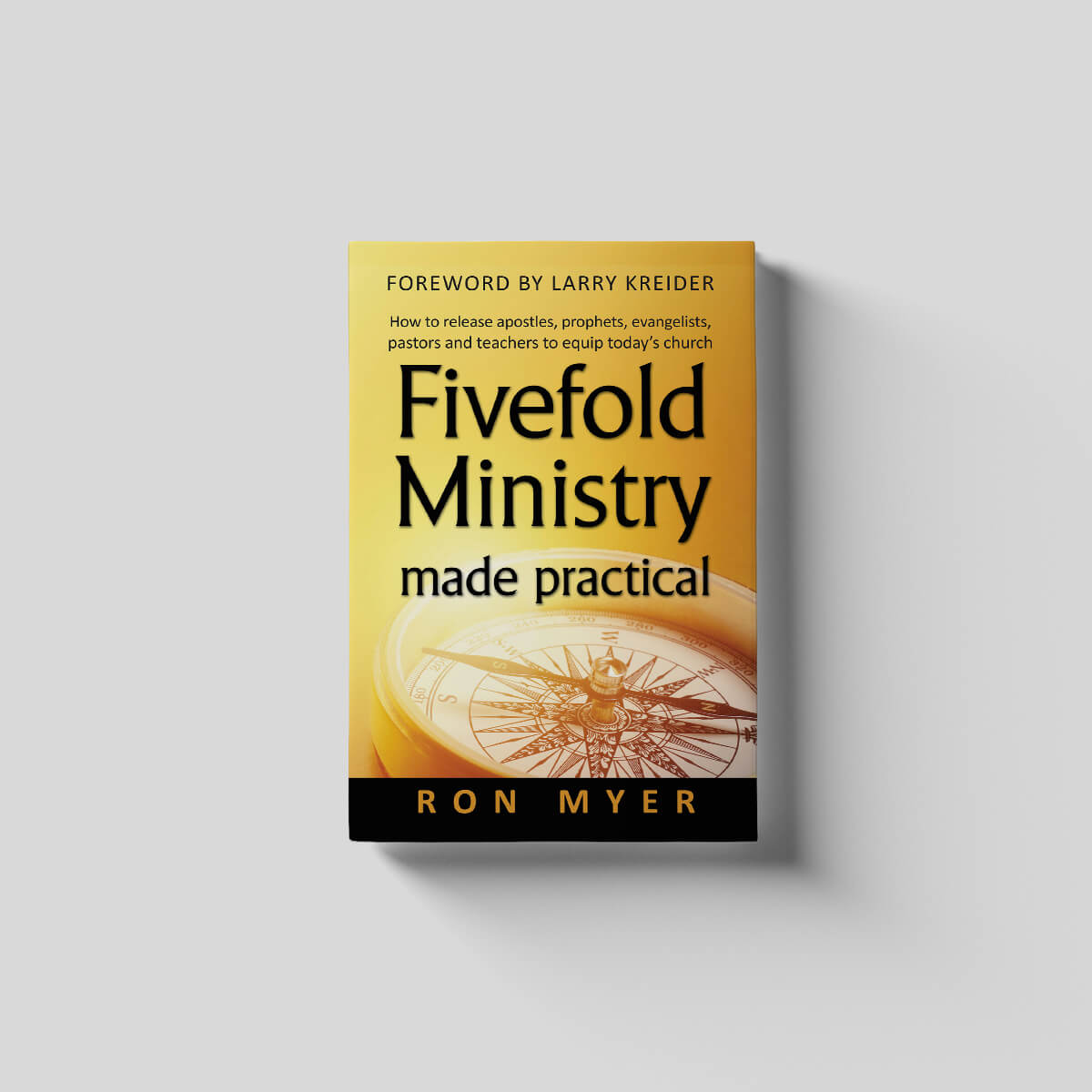